Waiting for the Cars features 218 photographs of the construction of the Central Pacific Railroad made by Alfred A. Hart. The images are presented as the photographer made them, in full 3D stereo. These are made accessible by the included 3D glasses. The dual-image stereo cards are presented in full color on the facing pages of this 480-page hardbound book. 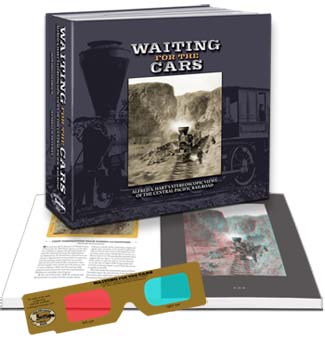 The text is by prominent Nevada railroad historian Wendell W. Huffman. These extensive captions evocatively explain whatever activity Hart may have recorded, and place what is seen in the context of the construction or early operation of the railroad. Some captions recount a subsequent event related to the location. Just as the railroad wound through a variety of landscapes, the subjects of the captions sometimes range far and wide, though they are all relate in some way to the scenes that Hart recorded.

The original photographic research, and the anaglyphic conversions from the nineteen-century stereo cards, are the work of Howard Goldbaum, a professor at the Reynolds School of Journalism at the University of Nevada, Reno. The conversion of the 150-year-old stereo cards into digital anaglyphs of high quality presented a number of challenges, as some of the photographs were damaged by age or improper care. Since serious image defects would adversely affect the 3D presentation, the anaglyphs were digitally repaired where necessary. The original images, with any imperfections intact, may be seen in the stereo card reproductions on the text pages.

Waiting for the Cars includes an introduction written by Mead B. Kibbey, whose 1995 publication, The Railroad Photographs of Alfred A. Hart, Artist, was an inspiration for this book.

In April 1867, according to a piece in the Sacramento Bee:

A little fellow was looking through a stereoscope at a lot of California views, when by and by he came to that which represents the Bloomer Cut on the Pacific Railroad. He held it to his eyes a long, long time, when those around wondered why he dwelt so extensively on that one, asked him, and he answered, ‘I am waiting for the cars to come along.’

Waiting for the Cars is an album of these same stereoscopic views that commanded that youngster’s attention, including that of Bloomer Cut, along with many more that date from the following two years. While most of the views will be familiar to aficionados of the Central Pacific, few people have had the opportunity to see them reveal their full three-dimensional detail as photographer Alfred A. Hart intended.

Our hopes in presenting these images in a stereographic format are that they will be more pleasing and meaningful that the ordinary “flat” presentation, and that Hart’s art will find renewed appreciation. We hope that this “sense of place” media will make history come alive for our readers.

The cover of Waiting for the Cars features a lenticular 3D image derived from Alfred Hart’s stereo card entitled “First Construction Train Passing the Palisades.” This 3D image uses a special grooved plastic lens affixed to the image that allows the eye to see the photograph in three dimensions without the use of 3D glasses. A detail of the lenticular image (without the lens) is shown at right. Click on the image to see an animated 3D illusion that approximates the stereo effect of the lenticular on the cover of the book.